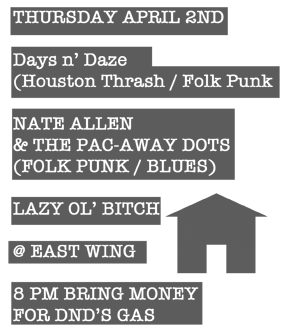 Days N’ Daze are returning to KC. This will be one rad house show. DND are one of the best diy, thrash grass, folk punk bands around. I’m stoked to play our Nate Allen & The Pac-Away Dots, bluesy rock n’ roll / folk punk with them.  Bring some money to throw in their gas tank and bring your friends. Let’s get sweaty together.

The video is by the fantastic Shibby Pictures.

Pre-order Take Out The Trash our debut album.

“Take Out The Trash is an eargasm of blues, folk and punk, with soul-wrenching lyrics that remind us of the days when the meaning behind the music actually mattered” – Huffington Post

“Reminds me of when I first started to break away from listening to top 40’s music in 1984 when some one gave me a burned cassette of the first Violent Femmes album. It’s got some good punk edges but smart in the way Jonathan Richman is with an original driving sound.” – Tim Hovercraft Records

Some useful words about the album.

Take Out The Trash features immediately accessible rock n’ roll tunes infused with blues, folk and punk. These 10 vulnerable and explosive songs will have you humming all day long.

A bit of the story: in 2013 Nate Allen found himself fresh off a long tour, unemployed, in his early 30’s, married and living in his parent’s spare bedroom. Everyone’s dream.

His plan was to take a sabbatical from touring, get an after college job and let life reassemble. Instead, wrestling with how blind he had been to the racism all around him, he accidentally wrote and recorded an album documenting his process in that tenuous season of life.

What started as an acoustic solo project turned into a full band recording channeling the sounds of the Social Distortion, Old 97’s, Johnny Cash, Pedro The Lion, The Pine Hill Haints, Against Me!, Violent Femmes, Larry and His Flask, and Slim Cessna’s Auto Club, to name a few.

We’ve put together a diverse “mixtape”, a peek at the many varied friends that we have made across the country. All pre-orders come with download of this mixtape via email. The independent artists on this playlist represent different genres and ideals, but the one thing that they all have in common is that they are friends of Nate and Tessa Allen. We blogged about each mixtape artist and every reward package will include a download of this playlist. Click on an artist name below to find out more.

Who is on the mixtape? 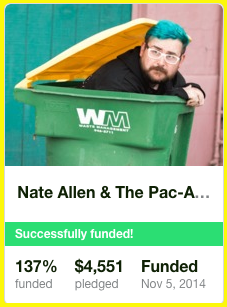 Wow! What a crazy ride! Thank you so much to everyone who pledged, shared, and came along. We had 169 kickstarter backers for Nate Allen & The Pac-Away Dots: Take Out The Trash – An Honest Look at Privilege, Racism, Unemployment and Being Burnt Out than for our last kickstarter… I am a little floored. This was more backs than our last kickstarter.